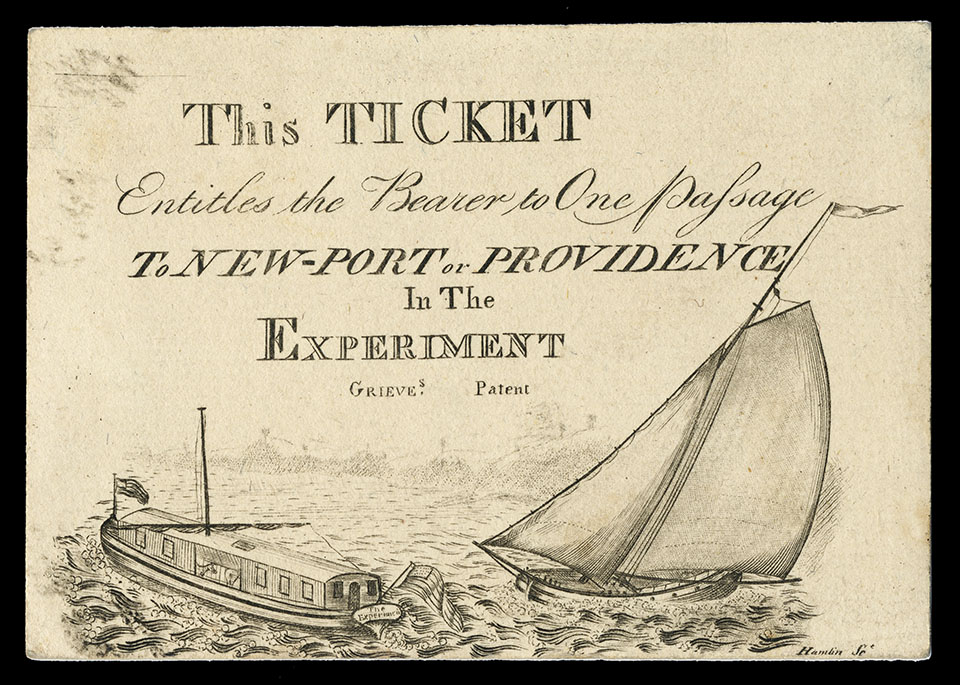 This small copperplate engraved ticket, found in a Providence antiques mall, is interesting on several levels. The engraver was William Hamlin (1772-1869), Rhode Island’s first engraver. According to an article in Rhode Island History, Hamlin “probably engraved less than one hundred plates.” (1) His “engravings” were actually etchings. A certificate he executed in 1798 for the Providence Marine Society “contains the earliest extant view of Providence.” (2) (also see Wikipedia)

He was also a goldsmith and an instrument maker. Three different Hamlin trade cards are known, one from sometime before 1832, another from sometime after 1847, and a third from between 1847-1867. (3) A checklist of Hamlin’s engravings appeared in the March 1925 issue of the magazine Antiques.

The “Experiment” was a boat powered by horses. According to the aforementioned article about Hamlin, it was “a boat built in 1807 by Varnum Wilkinson for the inventor, David Grieve. Grieve’s background was as a tailor on the island of Nantucket. The “Experiment” was driven by a propeller, with its power supplied by the horses walking on a treadmill. This revolutionary craft appears to have made but one voyage, a rather unsuccessful one, before being seized by Grieve’s creditors.” (4) However, another account states that “Experiment” continued as a passenger and excursion boat on Narragansett Bay in 1810, and was a very early example of a boat driven by propellor. (5)

David Grieve had been granted a patent on February 24, 1801 for “Boats to ascend rivers.” Unfortunately an 1836 fire destroyed all U S. patent office records from between 1794 to 1836. Grieve was apparently a well-known man about town in his day, who dressed rather flamboyantly and was something of a wit. “(Grieve) and another Providence man, John Nichols [ Jonathan Nichols, a blacksmith from Vermont. ed ], conceived the plan of propelling vessels by the use of screws, or by what is now called Ericsson’s propeller. A ‘propectus’ was proposed, and shares were sold, and in that way money raised to build a vessel about 100 feet long with a 20 foot beam, which drew only a few feet of water. She was designed by John E. Eddy, had three masts [ the ticket shows one mast. ed ], and was rigged by Richard Marvin, after the manner of a Dutch galliot. Her machinery was constructed by Ephraim Southworth. She was hastily and somewhat rudely built, and was ready to be tried about the middle of August, 1807. She was to be moved by horse power, and Marvin Morris . . . who . . . supplied the eight horses to put the machinery in motion. The vessel started from Jackson’s Wharf on Eddy’s Point, and went off finely on an ebb tide, bound for the village of Pawtuxet, and with the wind and tide in her favor made a speed of four knots an hour . . . On the return a gust of wind drove the boat upon the mud flats . . . where she lay all night. Such was the end of the “Experiment.” (6) It is thought that the boat did not have a keel, which may have made it more subject to the forces of wind.

The boat was subsequently purchased by a Boston mechanic at a sheriff’s sale. Under tow to Boston by a sloop, it went adrift and was wrecked in Buzzard’s Bay. (7)

Thus the ticket shown here was extremely ephemeral. Written on the back by David Grieves is “B J Ives” and “D Grieve”. Ives must have been one of the passengers aboard, said to have been a group of the Grand Lodge of Masons of Rhode Island, plus a wedding party. 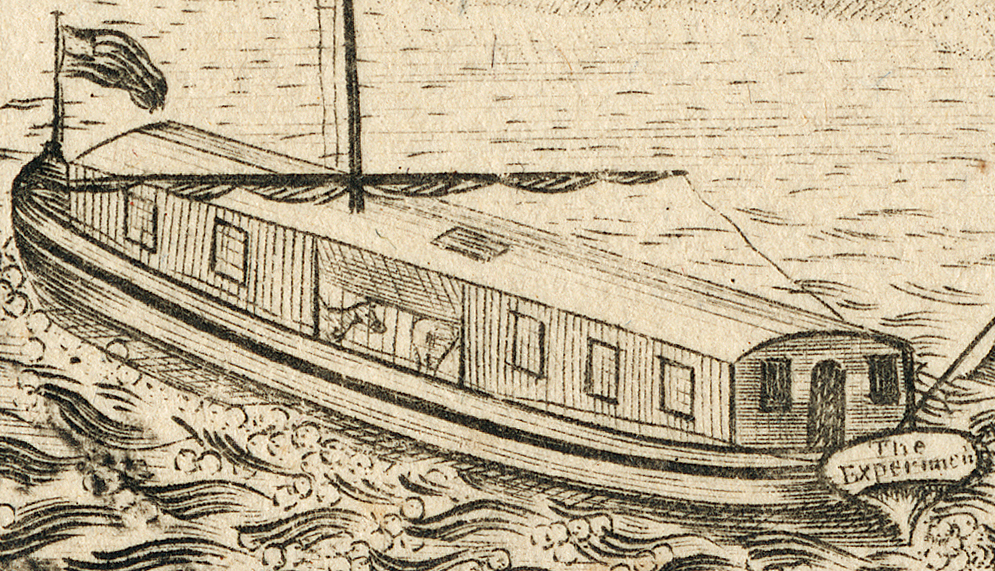