Receiving our current eNews by email monthly, is one of the
benefits of membership in the Ephemera Society. 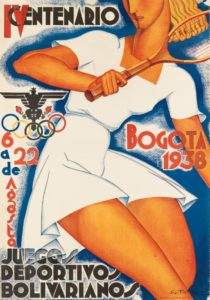 ESA News & Events
Join Us in Ann Arbor in October!

You’re Invited to Ann Arbor, October 17-18 Each fall, the ESA Board holds its mid-year meeting in a different city — along with a two-day tour of that area’s ephemeral riches. This year, on October 17-18, all ESA members are invited to join in exploring outstanding institutional and private collections near Ann Arbor MI. (By the way, note how well those dates dovetail with the 70th Michigan Antiquarian Book & Paper Show in Lansing, October 20.) 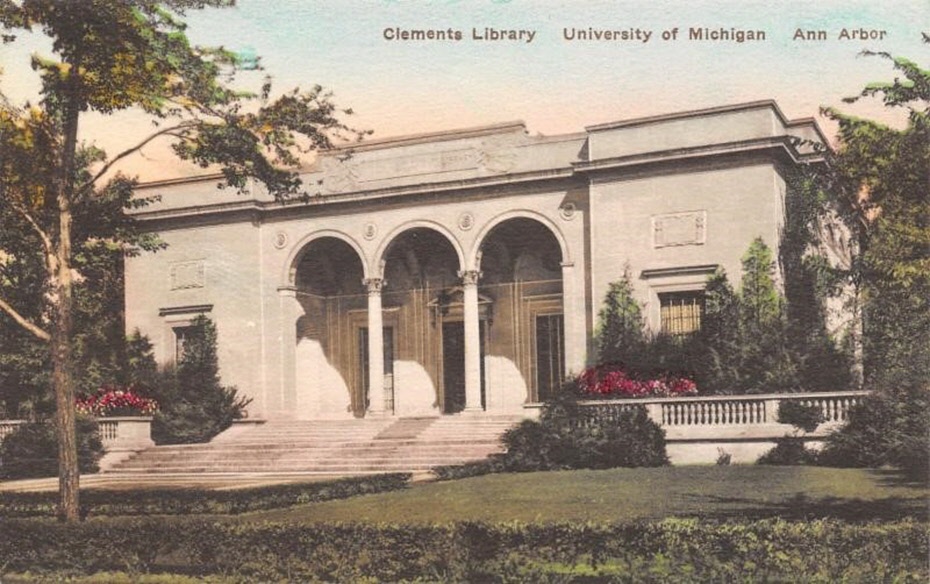 Thursday, October 17, will take us afield to Alma MI, where John Kemler has built a legendary collection of trade cards and Victorian Christmas cards, and his brother David has restored historic Michigan-made farm equipment using a reference library of factory drawings and trade catalogues.

Friday will be spent at the University of Michigan, visiting the William L. Clements Library’s renowned American history collections and then the Special Collections department of the Hatcher Graduate Library (home to the Joseph A. Labadie Collection documenting anarchists and the history of social protest movements, and the Janice Bluestein Longone Culinary Archive). The day will end amid the rare books and ephemera of Garrett Scott, Bookseller.

The ESA has negotiated a special nightly rate of $130 plus tax at the Hampton Inn Ann Arbor-West (734-994-1100, event code “Ephemera Society” or “ESA”). For more info and to register, contact Board member Barbara Fahs Charles (bcharles@staplesandcharles.com).

Countless women have challenged social expectations to accomplish great things in the arts, humanities, medicine, science, sports, politics, and the military. Ephemera 40 will focus on the achievements of such women around the world and over the centuries — contributions to society that have all too often been overlooked. At our 2020 ESA conference, speakers will cover an array of topics on women’s accomplishments, using ephemera (advertisements, broadsides, posters, menus, correspondence, tickets, programs, pamphlets, etc.) — to tell their stories. Friday’s lectures are followed by a jam-packed weekend — a banquet, two auctions (silent and live), exhibits, our annual all-members meeting, and, of course, America’s premier Ephemera Show! 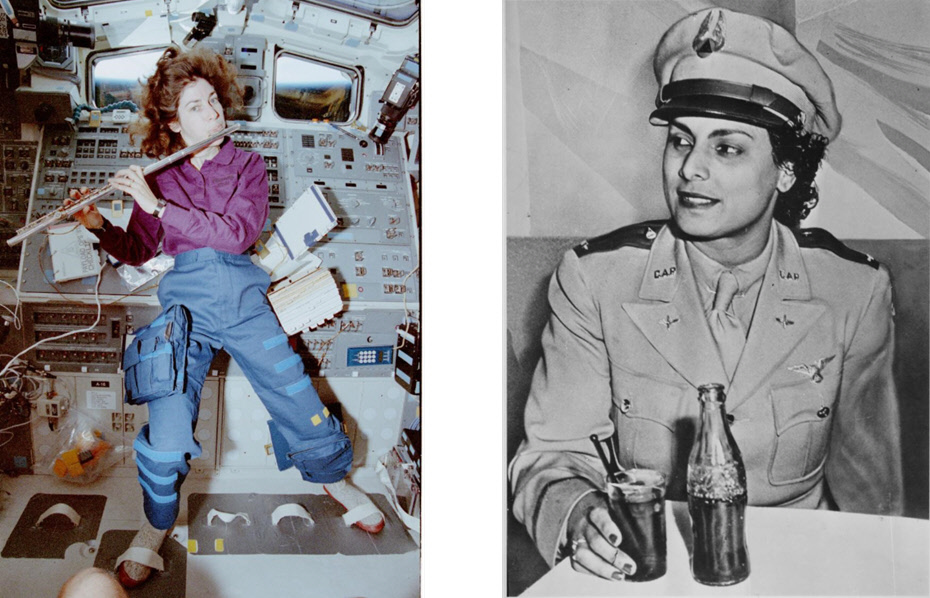 Above: Exhibitions at the National Archives (See Ephemera on Display, below) are celebrating the 100th anniversary of the 19th Amendment and other milestones in the struggle for women’s rights. A) Ellen Ochoa is a scientist, inventor, pilot, classical flutist, and the first Latina astronaut in the world to go to space.Her work in optics led to three patents that help computers to “see” (process images). Accepted into the NASA Training Program in 1990, she was chosen for four missions totaling almost 1000 hours in space. Her final flight was to the International Space Station in 2002. B) “Willa Beatrice Brown serves her country by training pilots for the U.S. Army Air Forces,” ca. 1942.

In 1938, Brown became the first black woman to earn a commercial pilot’s license. With her husband, she opened a flight school dedicated to training black men to become pilots. When World War II began, she worked to integrate aviation schools and was the first woman to be commissioned a lieutenant in the Civil Air Patrol, the civilian auxiliary of the U.S. Air Force. Credited with training more than 200 men and women, her school supplied trainees to the Tuskegee Airmen program.

A Smorgasbord of Ways to Support your ESA

1. Brother, Can You Spare Some Time?

Your Society’s structure now includes a number of important functioning committees addressing our priorities, mission, and needs. Each committee is chaired by a Board member and welcomes participants from the general membership. Three especially vital committees are seeking volunteers: Membership, Fundraising, and Dealer Relations. For more, please contact ESA President Dick Sheaff at sheaff@ephemerasociety.org.

2. Experience the Wonders of Technology

Amazon provides a way to support the charity of your choice by purchasing through AmazonSmile. You’ll find the exact same shopping experience as Amazon.com, with the added bonus that Amazon will donate a portion of the purchase price to your favorite charitable organization. No fuss involved! Go to smile.amazon.com to learn more.

3. Last, but Not You-Know-What

We welcome the more traditional kind of donation, too! To give while our new website is under construction, contact info@ephemerasociety.org. The Ephemera Society of America, Inc., is a 501(c)(3) charitable organization certified by the IRS.

In 1920, American democracy dramatically expanded when the newly-ratified 19th Amendment to the U.S. Constitution prohibited the states from denying the vote on the basis of sex. This crowning voting-rights victory was made possible by decades of persistent political engagement by suffragists. In celebration of the 100th anniversary of the 19th Amendment, the National Archives Museum (Washington DC) has organized Rightfully Hers: American Women and the Vote. On view through January 3, 2021, the exhibition highlights the long, determined struggle of diverse activists to secure voting rights for all American women.

For those who can’t make it to DC, the good folks at the Archives have provided an array of other ways to experience this chapter in our history. The Rightfully Hers web page includes links to teaching tools and to digitized manuscripts, photos, films, and more. Sixteen hundred engaging and educational Rightfully Hers pop-up displays have been distributed, and can also be downloaded in poster form. A related traveling exhibition, One Half of the People: Advancing Equal Rights for Women, will visit the West Baton Rouge Museum (Port Allen LA, November 10, 2019 – January 7, 2020), the Pink Palace Museum (Memphis TN, April 6 – May 25, 2020), and the Spartanburg County Public Libraries (Spartanburg SC, January 24 – March 16, 2021). Perhaps coolest of all, anyone with internet access can become a Citizen Archivist, making original sources more searchable by transcribing documents or tagging details of photographs from the suffrage and women’s history collections.

The National World War I Museum and Memorial (Kansas City MO), home to some 330,000 artifacts of the Great War, has marked a lot of centennials recently — and it isn’t through yet. One hundred years ago, in 1919, nearly five million American servicemen and women were beginning to demobilize. Almost half had served overseas.

After the dockside homecomings and the main street parades, what did the returning veterans experience? Open through September 15, We’re Home — Now What? uses archival materials to examine the often challenging transition for service personnel from war duty to civilian life. Featured is a collection of posters commissioned by the U.S. Army General Staff’s Morale Section, most of them created by Army captain and illustrator Gordon Grant. These depict a model former serviceman who uses the discipline, can-do attitude, and leadership skills developed in wartime to make a difference in his life, career, and hometown. 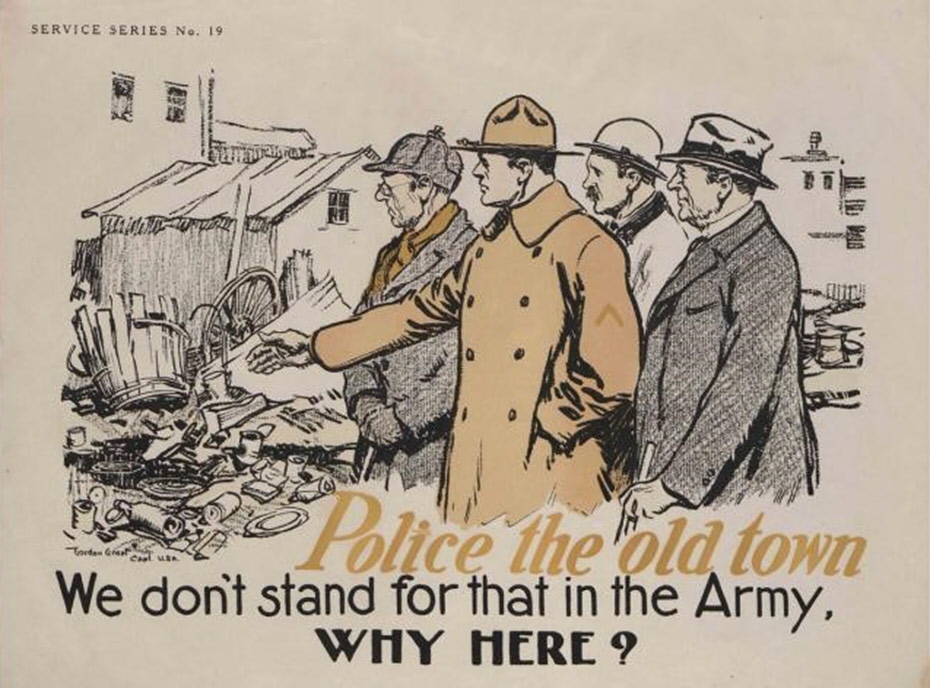 Also on view is Devasted Lands (through December 22), a study of ruin in original photographs and illustrations, and The Color of Memory: Fabric Art of WWI (through September 2), showcasing handcrafted keepsakes and commercial souvenirs from Australia, Belgium, France, Germany, the UK, Russia, and the United States, all made for and by soldiers and their families.

A) Imperial German silk-screened fabric table cover showing many of the German military leaders in 1914. Such covers were often used in the entry of a home to show patriotic fervor.

B) Memory plaque of pen-and-ink decorated airplane fabric from those who served in the U.S. Air service at Carruthers Field TX, 1917-1919.

The Army isn’t all work! No, sometimes it’s cricket, soccer, and riding wild beasts. In the peaceful years after World War I, governments tried new advertising strategies to attract recruits. See examples at Swann Galleries’ August 7 Vintage Posters sale. Left to right, James Montgomery Flagg, ca. 1918, $4,000 – 6,000; Graham Simmons, 1919, $1,000-$1,500; and Howard Chandler Christie, 1920, $7,000 – 10,000. Also rare is a 1938 series by Sergio Trujillo Magnenat celebrating the first Bolivarian Games, which were patterned after the Olympics to honor Bogota’s 400th anniversary. None have appeared on the market before; Swann’s offers four of the eight designs, expected to bring $2,000-$3,000 each. 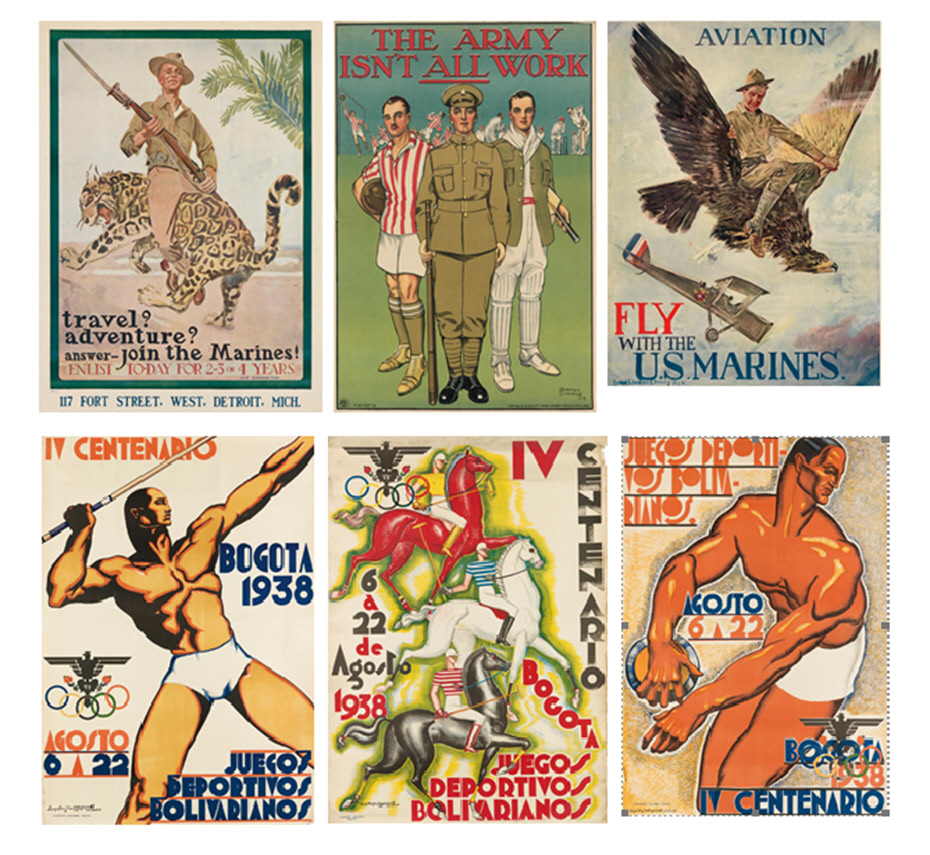 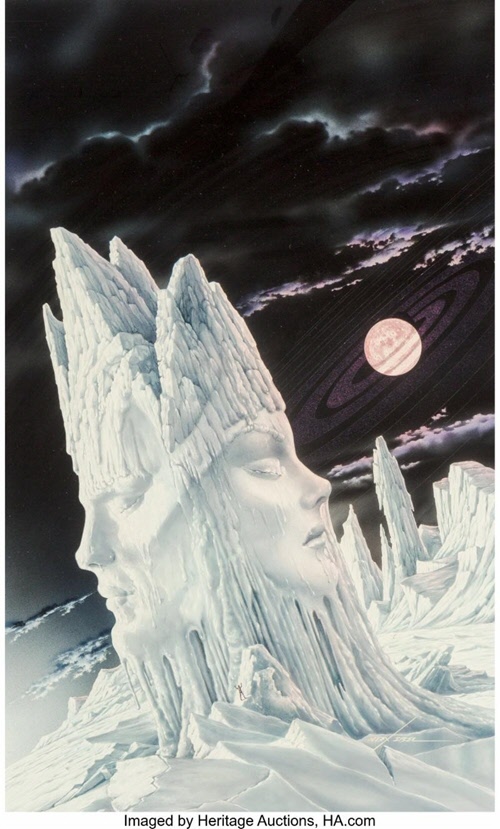 August will be busy at Heritage Auctions, with sales of Comics, Comic Art, and Animation Art August 1-3, and of the Crain Collection of Science Fiction Art on August 15. (The well-known cover by Alex Ebel for Hugo and Nebula Award winner The Left Hand of Darkness, 1974, is shown.) Sports Collectibles go on the block August 17-18, and Sports Photography on August 23.

PBA Galleries’ Summer Miscellany sale on August 8 features collectible books and assorted memorabilia in all fields. More than half the lots relate to the game of golf, but you’ll also find items like this 1950s program from the Folies Bergere in velvet-like wrappers, which could bring $200-$300. The cast-iron and bronze Dunlop Man ashtray carries a $10-$100 estimate, as does the issue of TV Guide signed by Charlie’s Angels. Later, on August 22nd, PBA holds a sale of Americana, Travel, and Cartography items with a focus on Mexican War material.

Much Ado at the Brooklyn Book Fair, September 7-8

In addition to a hundred and ten quality dealers, the Brooklyn Antiquarian Book Fair (which includes the Brooklyn Print & Photo Fair) has scheduled a list of activities sure to warm the cockles of any ephemerist’s heart. This year’s seminars (pre-registration advised) cover topics from “Collecting Grimoires, Spell Books, and Witchcraft Tomes” to the life of William Mumler (the inventor of spirit photography) and a discussion of how pictures, photos, and ephemera were displayed in homes between 1880 and 1920. Admission proceeds from the Saturday morning “Bagels and Books Preview” will go to fund scholarships to the unique and wonderful Rare Book School, and there will be art exhibits, a free appraisal clinic, and more.

In an unusual and dramatic move, the photo archive of Ebony and Jet magazines — a four-million-photo chronicle of 20th-century African-American life — has been purchased at auction by a group of major foundations for presentation to the Getty Research Smithsonian’s National Museum of African American History and Culture and the Getty Research Institute. Owned by the magazines’ original publisher, now in bankruptcy proceedings, the archive was recently ordered sold. Historians feared that it would vanish into a private collection, but leaders at the Ford Foundation, The J. Paul Getty Trust, the John D. and Catherine T. MacArthur Foundation, and the Andrew W. Mellon Foundation worked quickly to assemble an unusual $30 million joint bid. For more on the story — and for a tiny sample of the history represented by the archive — click here and here for New York Times coverage of the sale.

The 50-year anniversary of the Apollo 11 lunar landing brought events and celebrations nationwide. It also brought a flurry of auction activity, with mixed results. Since November, Heritage Auctions has hosted three sections of a four-part sale of memorabilia from Neil Armstrong’s family, with each segment pulling in several million dollars. In July, in the third round, the gold Robbins medal that accompanied Armstrong on the lunar module went for $2,055,000, and even his childhood teddy bear (below) brought $3,500. On the other hand, Christie’s New York confidently predicted that the star of its own anniversary auction, a timeline used on the module with notes jotted by Armstrong and Buzz Aldrin, might go for up to $9 million. In fact, it failed to sell for $5 million, and the entire sale racked up just $900,000. 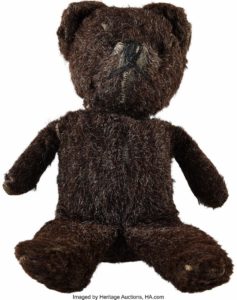 For background on the Armstrong auction, read the New York Times article, “Would Dad Approve? Neil Armstrong’s Heirs Divide Over a Lucrative Legacy.” And finally — just in case you haven’t had enough lunar-landing auction news — the Times also ran a piece involving Sotheby’s and an unconscionable level of carelessness on NASA’s part: “How Moon-Landing Tapes Found in a $218 Batch Could Fetch $1 Million.” I’ll avoid spoilers: Click here for the final sale price.

The eNews, published monthly by The Ephemera Society of America, is edited
by Anne Stewart O’Donnell.
Contact her at enewseditor@ephemerasociety.org.