The story of North America is a story of immigration. With the exception of its native peoples, all Americans came to this country from somewhere else. They have arrived as trailblazers and as refugees, seeking new freedoms or economic opportunities, to unite with family or to escape looming annihilation. Sadly, those who arrived as slaves were forcefully taken from their native lands. Some have been celebrated, many welcomed, and still others, reviled and subjected to cruel and exclusionary treatment. All have carried something of their home countries that has been absorbed into their adopted home. Coming to America—The Immigrant Experience will tell these stories through ephemera. This full day conference took place on Friday, March 15, 2019. 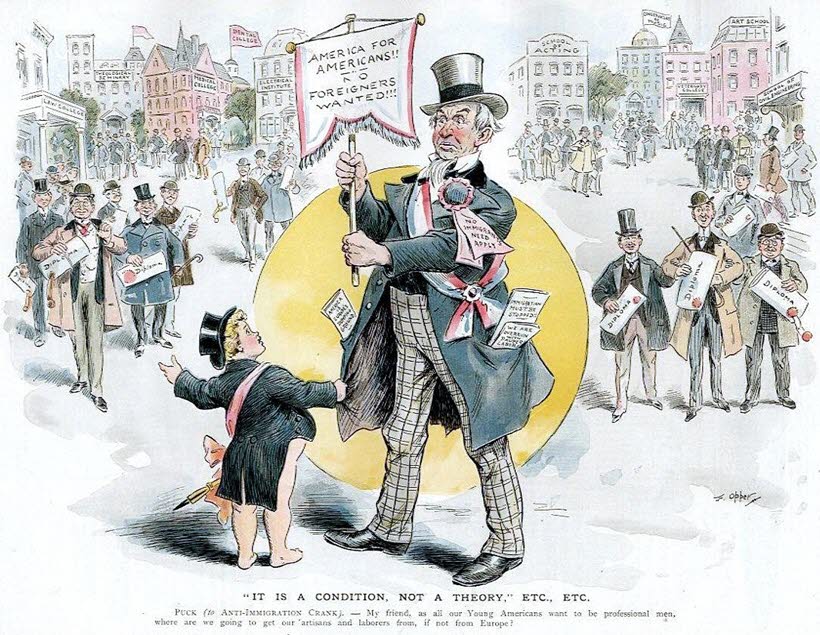 Immigration formed the United States, but it has often been controversial both socially and politically. From exclusionary legislation in the 19th century to keep out the Chinese, to today’s fraught border with Mexico, the 2019 conference speakers embraced many facets of the immigrant narrative using ephemera to illustrate their research. Presenters showed how Chinese laundrymen advertised in the Midwest, how the Mormons facilitated immigration from England, and how the cigar trade founded Tampa. Posters and trade cards were highlighted to review racial stereotyping – for good or ill – specifically of the Irish and the Chinese, but also for other immigrant groups. Different immigrant groups strongly influenced American cuisine and other folkways. All groups could be targeted as consumers or praised for patriotism.

Our speakers — museum curators, academics, as well as independent collectors and scholars — view ephemera as essential to understand both the immigrant experience and societal attitude towards different groups. Many of the presenters bring personal stories that inspired audience participation.

Attendees who came early, on Thursday, attended an afternoon of young scholar presentations on the use of ephemera by college students in the classroom.

On Saturday and Sunday March 16th and 17th, was our widely anticipated Ephemera Fair considered by many the best in the country. There were exceptional material from a broad spectrum of knowledgeable and experienced dealers, displaying an array of materials on countless topics. The materials are rich in content, desirable to the eye, entertaining and whimsical–choose your favorite adjective and it will apply. The Fair ran from 10 am to 5 pm on Saturday, with an early preview for Ephemera Society members only at 9 am. On Sunday the Fair ran from 11 am to 4 pm.

Throughout the weekend you could view ESA member exhibits showcasing one or more aspects of their personal collections.

Following the Fair on Saturday, the Ephemera Society held its annual fund-raising auction, preceded by cocktails and followed by our banquet, open by reservation to all ESA members. Our banquet presentation featured a presentation by Evie Eysenburg on The Chinese Exclusion Act – Shaping People’s Opinions. Sunday morning featured our Exhibitor Roundtable where exhibitors had the opportunity to describe their themes and the significance of the pieces they selected.