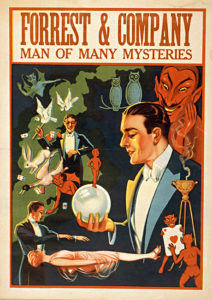 Eric Bernard has collected antique paper theaters for 30 years. He holds a master’s degree in Arts. Eric’s career in arts management has included Lincoln Center Theater, the Museum of Modern Art, and, currently, the Metropolitan Opera.

Robert A. Olson: “The Ephemera of Magic”

Robert Olson’s interest in magic began as a child when he received a Mysto Magic set as a gift. Forty years ago he linked magic with his love of history and recreated the show of Richard Potter, America’s first magician, for Old Sturbridge Village, leading to a 25-year stint with the museum. His special interest is Victorian magic-theme trade cards.

Valerie Jackson-Harris has been an ephemera dealer for more than 35 years. Her expertise has enabled museums, libraries, and private collectors around the world to acquire items to complement their collections. She is Chairman of The Ephemera Society (U.K.), custodian of the Peter Jackson Collection, and with her late husband received ESA’s Maurice Rickards Award in 2003.

Barbara Fahs Charles is a partner in the firm Staples & Charles, specializing in design and interpretive planning for museums. Recent projects include exhibitions in the new visitor center at Monticello and reinstallation of virtually all of the galleries at Detroit Institute of Arts. Barbara helped to found the National Carousel Association, and is the editor of the journal Merry-Go-Roundup.

Kathy Maher, Executive Director and Curator at the Barnum Museum in Bridgeport, CT, has 21 years of museum experience. She has envisioned and created numerous social history exhibitions and programs exploring themes from the transformation of family structure and the role of women during the American Civil War, to the struggles and triumphs of an emerging 19th-century industrial America.

Richard Balzer: “The Magic Lanterns – 200 years in the Limelight of Popular Culture”

Richard Balzer is interested in early visual entertainment and is a major collector of magic lanterns, optical toys, and related ephemera. His career has included time as a photographer, writer, lawyer, and strategy consultant. He is the author of five books, and runs an organizational consulting firm.

Don B. Wilmeth: “The Playbill, from Greece and Rome to Broadway”

After nearly four decades as theater historian and stage director at Brown University, Don Wilmeth retired in 2003 as the Asa Messer distinguished professor. Author, editor, co-editor or series editor of some four dozen books, he has collected theatrical memorabilia for 50 years. Since retiring he has curated three major exhibits drawn from his collection.

Michael A. Morrison is a New York-based writer and teacher. He has been a collector and dealer of early theater memorabilia for more than 20 years. He received his Ph.D. in theater and has contributed theater-related articles and reviews to a number of publications. He is the author of John Barrymore, Shakespearean Actor.