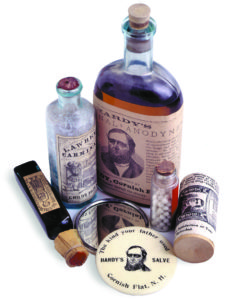 This year’s ephemera conference features discussions about healthcare advice for babies in the 19th and 20th centuries, children’s literature and book creation, ephemera related to medical self-treatment, Harriet Beecher Stowe’s writings, love letters from a world cruise in 1926, printed ephemera from Minnesota, and transportation documents from the 19th century. For more, see the complete list of topics below:

Russell A. Johnson: “What Ephemera Reveals to Medical Scholars”

Russell Johnson grew up in Massachusetts and Maine but now has lived half his life in Los Angeles. He is the archivist in the History & Special Collections Division of UCLA’s Biomedical Library, which includes the John C. Liebeskind History of Pain Collection.

Terri Goldich has been curator of the Northeast Children’s Literature Collection and the Alternative Press Collection at the University of Connecticut Thomas J. Dodd Research Center since 1988. Ms. Goldich won the University of Connecticut Library Award for Excellence, and she has written and taught about various aspects of the collection, and has represented it in the broader media, and at a great many academic conferences.

Katherine Kane is the chief spokesperson, advocate and representative of the Harriet Beecher Stowe Center, directing programs, exhibits and outreach using three historic buildings on 2.5 acres in Hartford, Connecticut, with the mission to provide vibrant forum and inspire commitment to social justice. Important collections and programming areas include women’s and African American history, the context of contemporary issues, and the interrelationships of races, ethnic groups, class and gender. She previously worked at the Colorado Historical Society and the Denver Art Museum. She has been awarded the Civitan Citizen of the Year; the Gracie Allen Award for CPTV video on Stowe and Mark Twain’s neighborhood; and the Connecticut Humanities Council’s award for Uncle Tom’s Cabin at 150. Her many articles have appeared in publications such as Museum News and the Utah Historical Quarterly; and she has organized workshops, exhibits, and meetings for museum and library groups.

Moira F. (Molly) Harris, Ph.D, has written numerous books and articles on the history of art and popular culture. Her diverse subjects include Minnesota’s outdoor sculpture and murals, the St. Paul Winter Carnival, Hamm’s Beer advertising, and Sicilian donkey carts. At the 2004 Chicago Humanities Festival she served on a panel dealing with poker, her topic being the poker-playing dogs. Molly and her husband, John Harris are the proprietors of Pogo Press, Incorporated, a small press located in St. Paul, Minnesota. John has written books and articles concerning postal history subjects and articles about local history.

Donald Zaldin: “Getting it in Gear – The Revolutionary Impact of the Bicycle on 19th-Century Culture”