Nothing has changed the modern kitchen more than the introduction of electricity. The early 1900’s kitchen had the icebox on the back porch and wood stove in the kitchen. With electricity the refrigerator was moved inside the kitchen and it became the focal point instead of the stove. By 1930 Westinghouse Electric boasted that “electricity makes women free.”

A 1912 postcard illustrating the modern kitchen with the sanitary and biggest ice-saving refrigerator (icebox). Notice the location on the back porch away from the inside heat of the wood cookstove.

The first household refrigerator was available in 1913. But it wasn’t until General Motors (GM) purchased Guardian Frigerator Company in 1918 that we saw the mass production of electric refrigerators. Appliance companies copied the assembly lines established by the automobile industry. Not to be outdone, General Electric (GE) boasted that they had 64 skilled engineers working since 1913 to create “an electric refrigerator so efficient, so simplified that it could literally be installed and forgotten.” 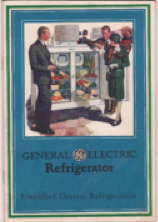 GE and Frigidaire were the two biggest names in home refrigeration and kitchen design revolved around the refrigerator. In this Westinghouse Electric brochure, the efficiency of the kitchen is considered, meal preparation with the least amount of steps from the pantry to the table.

By the end of WWII, companies like Westinghouse, Youngstown Kitchens, Mutschler Kitchens & Mengel Royal Wood Kitchens, just to name a few, advertised designing your dream kitchen. Postcards and booklets were readily available for the homeowner as a way to encourage households to upgrade their kitchens. The modern kitchen with all-electric appliances not only saved a woman time but provided safe and sanitary food storage.

Then in the late 1950s, something wonderful happened to the refrigerator. Americans lived in the land of plenty. Cars were as big as boats with huge chrome bumpers and tail fins. The design of the refrigerator door illustrates the abundance in American households. Large chrome handles, unusual colors and larger capacity refrigerators began replacing the simple 1920’s and 1930’s plain white models. 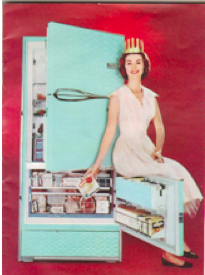 And so the modern kitchen was born. Electricity was indispensable not only for the refrigerator but also for the dozens of small appliances designed to make food preparation easier.

Postcards and brochures were how companies let the public know what was available. People collected these ephemeral items and it has helped document changes to the American kitchen.